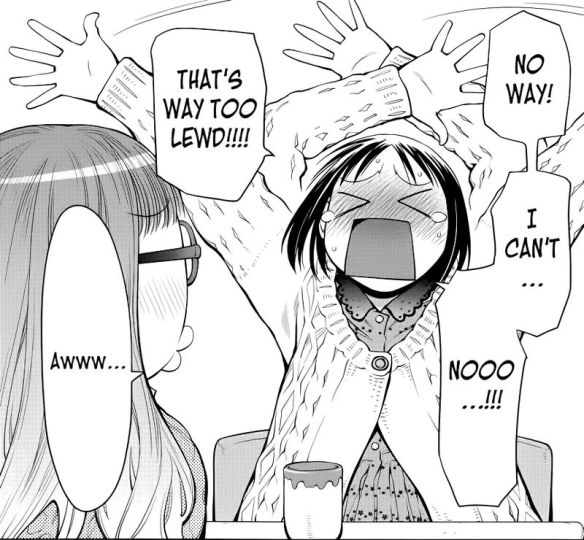 English language fan-translations of Kio Shimoku’s follow-up to his Genshiken saga have fallen way behind, leaving only  determined readers to search out other language scans and try their hands with phone translation apps. As well, a vocal number of the old-guard Genshiken fans have walked away from Spotted Flower as sequel, bitter that the author slammed his two most prized creations together for a few pages of furtive guy-secks. Much powder was burnt discussing if Spotted Flower can even be considered a sequel to the Genshiken, or even if it was all a dream, or a doujin-within-a-manga, penned by a 29 year old Ogiue.

I think we all missed something. Slow on the uptake. Sensei pulls out the bamboo cane and starts doing emphasis whacks, as if at some crusty zazen class.

Spotted Flower is here for the lewdz! 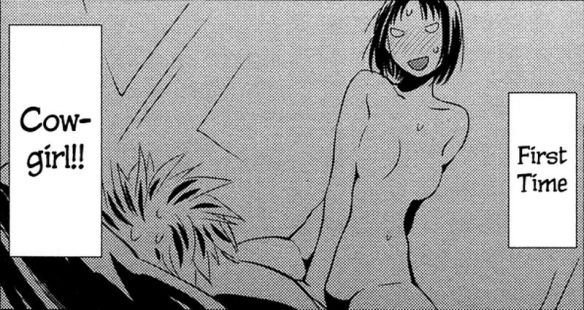 Rakuen LeParadis has a completely different readership demographic and Spotted Flower is a different property but perhaps we all were thrown by Saki/The Wife’s pregnancy. The characters are all grown up now. They get to do sex but somehow adult married sex feels disenchanted, less than as if they were still bright and shiny young things. Boring adults are boring as they get bored. They have nothing but their old otaku hobbies to do any more except fuck, and then fuck around. And thence back to work. Perhaps we were tricked into considering awkward married intimacy as somehow less lewd than???

By the time Kio-sensei was ready to go on a tear, we had all been properly set up.

One IRL year ago – the pace of Spotted Flower time crawls with its thrice yearly releases – Madarame was trying to get Sasahara to stand as alibi for Hato’s scent on a housecoat and was doing a damn poor job of it; turning the meetup into a brag session about some definitely-not-boring married 30-somethings’ sex. At the same time, Sue had come upon her napping boss Ogiue having a mildly hawt dream and had snapped; not merely stealing a waking kiss, but grabbing Ogiue’s boobs and vowing (in an echo of their first meeting) to steal her panties.

Chapter 27.5
Editor Endou attempts to gain more information from Ogiue about Asaska-sensei (Hato’s pen-name – possibly Hato/Yajima as a ‘circle’) and ends up going out drinking with Ogiue’s group plus Hato and Yajima after a day of convention doujin selling. Endou does her best to put aside her questions as to why Hato/ Asaka-sensei had a boner under her dress that one time, telling herself that her job is to encourage creativity. She then proceeds to get blind drunk and has to be carried by Yajima back to Hato and Yajima’s place – where it appears festivities continued. The next morning, Endou wakes foggy and hung over and bolts into the shower/ bath room (typically the toilet bowl has its own separate “water closet” in Japanese homes) where she gets a full-monty nekkid reveal of a just-showered Hato. Endou screams…

Chapter 27.5.2
Sue continues to sexually harass Ogiue with her big boobs. Ogiue ends up with her head under Sue’s top and decides to turn around and go for it.

Chapter 28
Ohno visits Saki, bringing her own baby and nurses both kids. Saki nods off from exhaustion. When she wakes, she tells Ohno that she suspects that her husband has cheated on her. Unsaid is that we all know that Saki knows damn well with who. 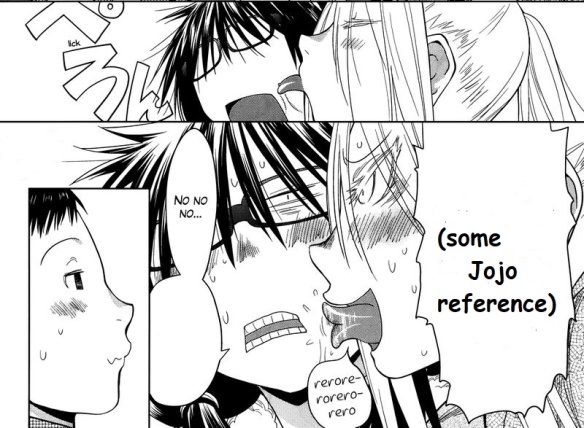 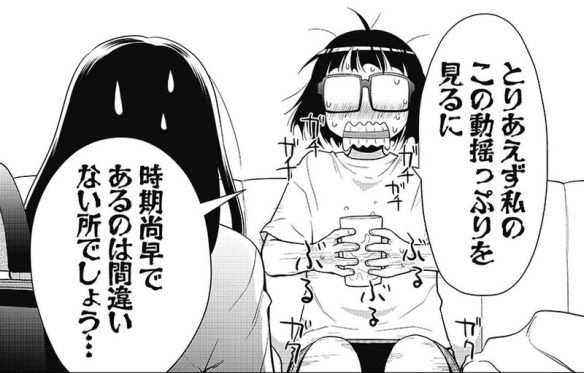 Chapter 29.5 (free web extra)
It is immediately after the hangover morning naked shower reveal. Hato had been thinking about a newly acquired naughty doujin while showering and was sporting an erection when Endou bumbled in. Endou-san is traumatized. Yajimacci angrily shoos Hato to the bedroom and tries to calm/ explain matters to their editor. Yajima even tries to sell Endou on the idea of Hato/ Asaka-sensei coming out as a fujoshi trans woman but this flips Endou’s ‘pro’ switch: the idea is shot down as likely to be taken as a stunt. Yajima senses that she is on the verge of losing their editor and plays her ace. Yes, sensei and her are a couple but sensei has had an “it’s only him” male crush since their university club days. Endou goggle mode to %110, coolant pressure rising, editor re-captured. When Hato is fetched back into the living room, Endou-san is fully dazzled.

The next issue of Rakuen LeParadis is due out at the end of February 2019.

A few points of note. Props again to the earlier correspondent who characterised Merei Yajima’s management and in-relationship style as “policing Hato’s gender and sexuality”. Merei policing mode at max. At least the cursed demotion to fudanshi status was avoided; fujoshi-dom instead advanced as the main reason/explanation for Hato’s presentation and top surgery. Even then the women’s’ fan homosocial/ magic circle that is BL threatens to evaporate for Endou-san:

“Yajima: So, you’re still willing to continue working with us, right?
Endou: I- I guess… I guess it would be fine, but… / I’m not sure if I can talk about BL as freely as before… But it should be okay…?”
— Spotted Flower, chapter 29.5, pps 10-11 Translated script by athrun_chan

…Which forces Merei to play her ace.

Wait for the sneaky self-satisfied-author kicker. The last words in the chapter mumbled by the now-fascinated Endou are in the nature of:

Kio-sensei is slipping us the notion that the neat little indeterminate-Hato puzzle he built for his Genshiken Nidaime readership has now hooked an in-story bystander. Once again Hato becomes both fujoshi creator/ consumer/ fangirl and male remainder whose same-sex desires can be offered up as bounty to the fujoshi collective. Can Endou make the conceptual leap? She had already granted tentative lesbian couple status to Yajima and Hato (a not unheard-of judgement as acknowledged by Yajima) but lesbian fujoshi are no big deal in their fandom. What is missing is the usual “heart-of-a-girl” placeholder-ism for a trans* /genderqueer identity. Only the unique trans-fujoshi conceit remains. There will be no table manned by CYAN publishing reps (Endou’s company. I’ve seen that logo before; is it a call out to one of Spotted Flower’s publishing company Hakusensha’s IRL divisions?) at any future Tokyo Pride parade. Not yet. Then again, Kio Shimoku’s critical view of fujoshi socials tracks with a 2000’s era (and earlier) apolitical/ socially disengaged view of BL fandom. Some suggest that this is changing.

However Japanese publishers, even in 2019 remain known for their cautious, conservative incrementalism (backed, tested and proven with sales figures). Endou-san’s division might anthologise select Asaka-sensei doujins but their bread and butter appears to be work-safe properties that ‘pro’ mangaka like Ogiue churn out. Ogiue’s circle might still whomp up some ‘good stuff” for big conventions but that’s a special treat for hardcore fans. Asaka-sensei must remain a trade secret for now.
.

I never completely got the existential shock that drove a significant number of Genshiken and even Genshiken Nidaime fans to make such a big deal out of whether Spotted Flower was a ‘true’, voice-of-god, cannon sequel. From the beginning, Kio-sensei’s pro-forma denials, wrapped in legal and industry rituals for an author two-timing different publishing companies made any final and definite pronouncement impossible. From a Schrödinger’s Spotted Flower, the obvious resolution, a wink and a nod toward the fannish conceit of the AU (alternate universe) seemed an inevitable step, especially since Japanese pop fiction is jammed to the rafters with time looping and probability shifting stories.

Spotted Flower ch 35:
Drunk Hato, Yajima and Endou garbage-pick an ancient IBN laptop and a microwave oven on the way home from a post-convention piss-up.

Few hardcore Spotted Flower detractors were ready to make the conceptual leap. Most who wouldn’t seemed to be guys. I might be wandering into wild speculation-land but guys don’t generally immerse as much in fanfiction culture. Even if aware of the lore, could the AU trope possibly be too ‘gendered’ for serious manly-fan consideration? Or the consideration of a subtype of guy fan? Give stuff like that a chance to get loose and next thing, it’s all multiple probability rotten fangirl shipping fic all the time. All the way down. Rinse, repeat.

Only a dream? Ok. A doujinshi-fied roman-a-clef that turns out to be authored by the “real” Ogiue. Cool Story Bro!. Kio Shimoku wanting to wreak misery and heartbreak upon the Old-boy Genshiken fandom, using his insidiously powerful ball-crushing attention-whoring gender-bent Hato creation as a 10-ton shithammer? Always suspected as much. Everything Hato Touches Dies!

What sad lack of imagination! Kio Shimoku got to the laptop and microwave oven first. If the author does it, it is no longer an AU. It took a bit of effort but he created a probability line where everyone lives, gets bored with their riajuu lives and starts fucking around. Then they really go at it. A lot!

Hijinx ensue! Who gets threesomed first?