Yes… In case you have wondered, I am also a big fan of smutty heterosexual romance grinders. Of these, Minamoto-kun Monogatari [ https://en.wikipedia.org/wiki/Minamoto-kun_Monogatari ] is just plain lewd hawt fun! Time to celebrate an ero-manga!

“Minamoto-kun Monogatari (源君物語) is an ongoing Japanese erotic seinen manga series written and illustrated by Minori Inaba [ https://ja.wikipedia.org/wiki/稲葉みのり]. It’s published by Shueisha, serialized since 2011 in Weekly Young Jump magazine, with nine volumes released so far. It is also published in French by Soleil and in German by Panini Comics.
Terumi Minamoto is a young man with features feminine enough to make people think he’s a girl. Because of this, he has never been intimate with women; instead he has been bullied since middle school by jealous girls and has developed a fear of women due to this. Just as he enters college and vows to himself to overcome his fears, his father remarries and asks him to move out of the house. Terumi is sent to live with his aunt Kaoruko Fujiwara, an extremely beautiful 29yr old non-tenured professor at his college. When he arrives at her home, she conscripts him into her project in which he must seduce fourteen different women in the manner of the protagonist of The Tale of Genji.”
— per wiki synopsis 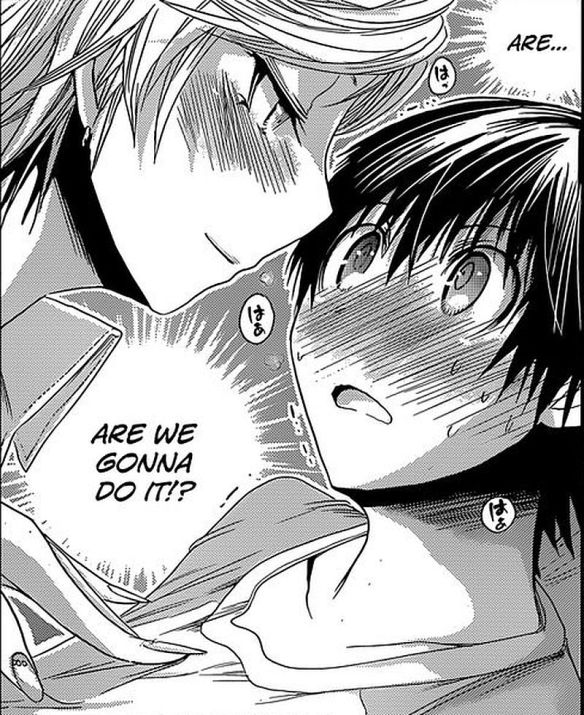 The women of Mina-gats are all zaftig and big-time sexy. The more mature ones are as scary as they are fascinating, or at least they are presented as such from the pov of our traumatized young protrag. Their charms may be on display for the male-gaze reader but within the story they are also deployed as a show of raw power. No simpering lolis here. A better argument for dating women of a certain age if one happens to be a gormless young guy at University has yet to be turned into a manga – at least one that I know of.(1)

While the premise of recreating the Tale of Genji might at first sound specious, it is less so than one may think. Japanese universities are full of sacred Bunka Nihonjinron rabbit hunts and the Tale of Genji is, after all the first recorded novel. Complex, chock full of rich characterisation and all about the important stuff: bored courtiers screwing around. Desire. Sex, Longing. Romance.

Meanwhile, light erotica with plenty of cleavage, curvaceous hips and thighs with much in the way of  lacy slips and boudoir fumbling is a great way for guys to fool themselves into reading romance stories, or at least stories that deal with bin-loads of emotional and romantic confusion. Along with the ‘want de babe(s)‘ overload, our hero also has a whole lot of anger and fear to sort through and when he lets loose with it, he is likely to …

Oh right; might as well throw in some crossdressing. Genji MK I was a looker too, neh? 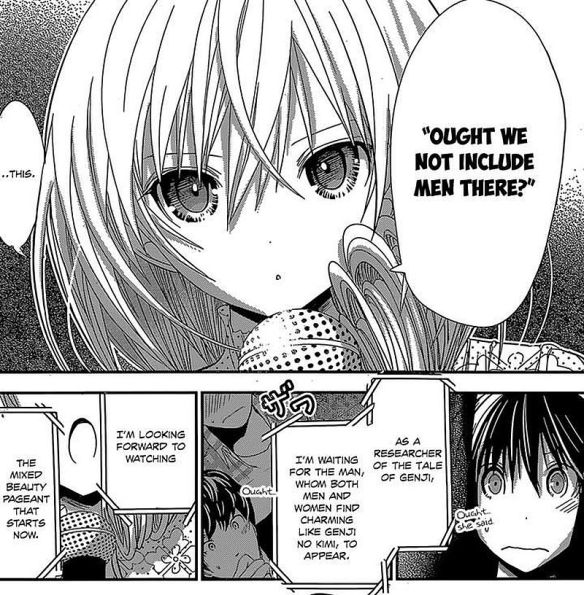 Bullied by girls because of girl-face is even an excuse for a “cross-dresser-as (obnoxious stereotype) -trap” arc: yup; seduction by deception but for mixed reasons of revenge and white knightery. Later he crossdresses openly again at a university beauty contest just to prove he can, so fuck you to some other young woman who once dissed him.

Undoubtedly some of the guys reading this are on board for the HOW TO PICK UP CHIX angle. Very simple, if disappointing: have your mean lady professor relative pimp for you. Not much help, but it does hint at the power of Japanese women’s social networks. As well it reminds me of the rueful confessions of a reformed PUA fool. What he finally realised was that all of his vaunted “seduction techniques” were him just spazzing about and telegraphing to women already out for a lark that he was up for a bit of fun and that he could be made to jump through a few hoops as foreplay. The gals still do the decidin’ but if you gotta go all bent outta shape about it, some of them are kewl with that too. They find it amusing.

Once Terumi is a tad less traumatized by women, he also finds that he is a fool for getting romantically worked up about them; so much so that he repeatedly threatens to quit the project and take up with one or another of his aunt’s “targets” for realsies. Then they all wander off for one reason or another and he is back to his job as slightly reluctant Lothario. Some of the women even know of his aunt’s project and are curious enough to indulge the lad. Getting swept up in the project and ending up with feelings for them is what nefarious auntie had planned all along.

So sit down, stare at auntie’s decolletage and debrief on your latest romp.

Mina-gats is also chock full of insinuation that psycho auntie is grooming the lad as a perfect romantic companion, a reverse take on obnoxious otaku conceits like “How to raise a boring girlfriend“. Japanese popular social commentary is still full of complaints by women that the stock version of Japanese manhood – while somewhat useful for breadwinning if you secure the correct model – are a complete wash when it comes to romance. Something must be still stoking the demand for Host Clubs. Love remains a battlefield, or at least a logistical challenge. The “correct” dating outfit for young women, promoted online and in fashion magazines remains a caricature of fresh and innocent femininity in a beribboned shift dress with a frilly hem and moderately sensible shoes. Wide brimmed white hat and book for summer occasions. It looks like an ad for a feminine hygiene product.

Some day, some wag, somewhere will sit down and do a compare and contrast to the conventions of women’s attire/ clothing/ uniforms etc in “conventional” manga and anime as opposed to the range of “expression” in smutty ero-manga. Myself, I no longer can fully decide what is worse; the overdone “sexy” stuff or the simpering conventions of “innocent and pure’ in mundane manga, which have become so exaggerated and formalised as to serve as a new form of obscenity in their own right. Genshiken Nidaime got the clothing issue spot on, no matter how you look at it.

It is telling that our hapless hero often meets his next intended in female exclusive spaces, where they can be themselves and not have to fend off advances from guys who think making such is their birthright or have to dress up in ritualised “deer in the headlights” attire. Terumi-kun is not a threat or even much of an imposition. Genji is a women’s tale and the women retain in-story agency; even more so than in the original – where Genji could occasionally get ahead of his skis and act like a cad.

As well, a number of Auntie’s women friends have their own issues, so lending out the kid can be a win-win as long as buddy boy doesn’t get ideas and mess up. Sadly, at first he does, repeatedly. Practice, practice, practice. Thank Ghu that Japanese universities are light on study loads, giving Terumi plenty of free time to be man-whored around.

What fun! A simple, smutty romance  saga with vague cultural pretensions and there is a whole lot of it with the chapter count approaching the 300’s and still four more hearts to win. Terumi by this point can be a tad annoying as he has developed a mild masochistic streak, especially when it comes to older women. Nothing serious and all in the service of reinforcing the notion that a guy might be better off by not always trying to be in absolute control of every damn thing while courting. Woman Mangaka Has Message. Maintain fine balance between sack-of-sand and pushy jerk, please. 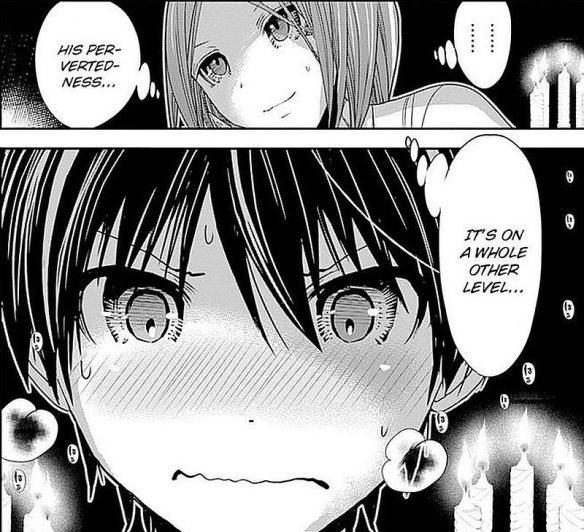 My most serious complaint with the saga is that only the most rudimentary public health measures are alluded to. Multiple sex partners warning: HPV and worse are a real concern. Bad mangaka, bad. If you are going to do the lewds, you should show some initiative and slip in some socially responsible health information, if only for verisimilitude. That the mangaka fails to do so falls prey to the stupid and dangerous “pure” “innocent”, inexperienced and ignorant fetish that powers up much of the otaku variant of objectification, even as the greater message of the tale must be that a fumbling, inexperienced lover is no way “cute” or desirable, but simply annoying.

(1) There is however a closely compelling argument for getting recruited as manager for your sister’s women’s volleyball team, but that’s a different smut manga.