“I’ve seen your face before my friend. But I don’t know if you know who I am.” – Slavoj Žižek

A funny thing happened back in January in the world of Japanese TV commercials (CMs/ Commercial Messages). All Nippon Airways tried a bit of subtle po-mo humour and a few noses bent themselves out of joint. Much ado was made about it, especially in certain regions of the blogosphere and then the ad was pulled. But no one chased the trope reference completely to its burrow.

Allow me to venture a small suggestion:

Some folks would argue that the orphan “Hafu” lolicon pervert Nicchi, of “The Otaku’s Daughter” (Otaku no Musume-san) is a generic gaijin clown character in any case, but then one must recall his odd back story (again full of quasi-xenophobic tropes, taken to ludicrous extremes – the ninja xtian cult, the sugar fix to calm him down, the fact that “the mother” originally lusted for him, rather than Kouta, etc, etc., ) Within the confines of the narrative, even Nicchi gets calmed down, humanized and finally assimilated.

A sampling of the coverage:

No sense of humor at all… jeesh! Then again if it had got out that ANA’s ad agency was suggesting that all Caucasian furreigners are fashioned from the mold of a ninja cult-christian pedophile it might have made the controversy even worse.

We would never do something that silly…

I am thinking about it.. fast, even

While off in Japan, I had a few moments to sit around in front of my laptop and enjoy some extremely fast internet, wiggle around certain aggregator sites’ lame attempts to make it appear that they take down scanlated manga when it is licensed (naww, they just block Jp IP’s with a “sorry it be licensed notice – use a proxy, like the one built into Torch ) and generally try to deepen my distorted understanding of current Japanese society. I didn’t indulge in too much of this kind of nonsense because she- who- up-with-me- puts  would remind me that I better not have traveled half way around the world to hiki out in her apartment( I got to see an honest to goodnees full Noh play! wow!).

Nevertheless, and while I claim no particular brilliant insights, a theme or two began to sneak up on me:

What with all the Abe-administration X China X South Korea fuss, and the off-noted political rightward drift in Japan, (and the right-wing echo chambers on some 2-chan boards) could manga like Gate – Jietai Kare no Chi nite, Kaku Tatakeri have a bit more zeitgeist stuck onto them than previously thought?

There are other manga efforts that play the neo-colonialism card in a similar, but less aggressive way, such as Outbreak Company: Moeru Shinryakusha

In the past when Japanese manga readers wanted a rip-roaring shoot-em-up fest, the tendency was to displace it to lawless exotic locales (Black Lagoon / ブラック・ラグーン), use exotic international characters and locales (Jormungand ヨルムンガンド) alternate time-lines (Full Metal Panic! フルメタル·パニック!) and the like.

The only time the JSDF seemed to make an appearance was in its alternate secret incarnation as the JAGDF . Looks like the times call for a bit more overt jingoism:

While them evil, slaving, raping, Machiavellian fantasy empire aristocrats are supposed to evoke imperial Rome, a la “I Claudius“, don’t they look a tad “Republican” as in WASP? 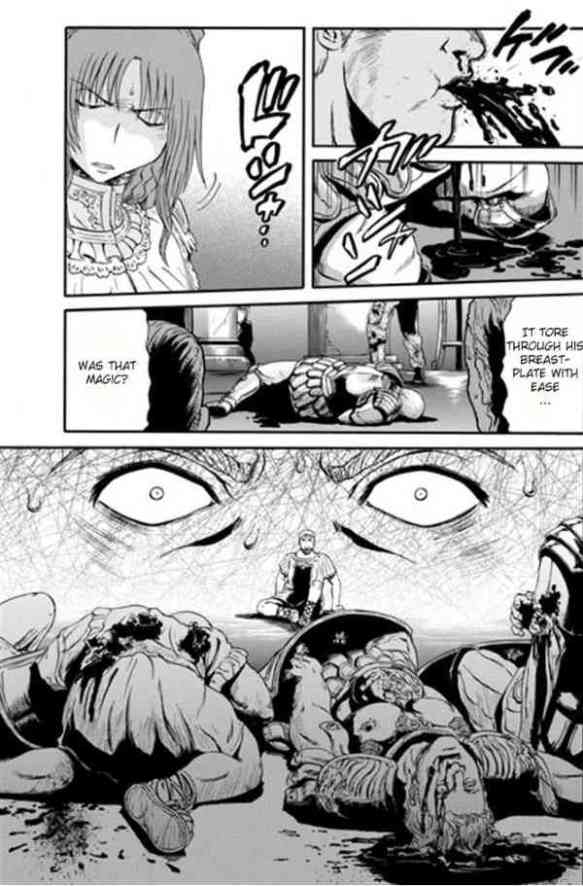 Ok, one really shouldn’t read too much into a simple adventure fantasy manga. Its yankee grandpa, Stargate SG-1 is pure US military propaganda too – there is something seductively cathartic about mowing down G’aould and Wraith baddies with heavy ordnance – and there is no reason why the Japanese reader shouldn’t get to enjoy the fun. I admit it; I have atavistic urges in my tastes for recreational reading, and judging from some of the marginalia by the various scangroups who are translating Gate, the urge to gleeful, obnoxious excess can be hard to contain. ( I assume they be trolling, patrolling… they couldn’t possibly…)

But when you start reading some of the reporting on the drift right-ward in Japanese politics – beyond shrine visits and “slight revisions” to article 9 of the constitution, things get a bit alarming. Looks like the neighbourhood has become a bit more dangerous of late and folks is getting antsy…

Then again, some online journals do run to the left of the political spectrum:

It Would Make No Sense for Article 9 to Mean What it Says, Therefore It Doesn’t: The Transformation of Japan’s Constitution (http://www.japanfocus.org/-C__Douglas-Lummis/4001)

Back to the Future: Shinto, Ise and Japan’s New Moral Education (http://www.japanfocus.org/-David-McNeill/4047)

Or perhaps manga was always an arena for this kind of debate (wonder if the /AK crew will grab one of these too?):

Revisioning a Japanese Spiritual Recovery through Manga: Yasukuni and the Aesthetics and Ideology of Kobayashi Yoshinori’s “Gomanism” (http://www.japanfocus.org/-James-Shields/4031)

It would be easier if somebody hadn’t snuck the ashes of those 14 into the shrine:

One also gets the feeling that some of the voices on the left should tone it down a bit too, lest they get a bit too apologetic towards Chinese and South Korean right-wing trolls. Chomsky.. Gehhhhh!

UPDATE: See http://www.economist.com/news/asia/21606338-no-more-guilt-tripping-say-young-bilious for a whiff of Japanese skinheads and ultra rightist manga. Aside from one loud right-wing band, the manga mentioned seem to be from one or two controversial dudes. TDR has  an xlated script for one. There are also translated excerpt kicking around if you look hard enough. Of note though is that the controversies mentioned are old hat in Japan, dating from around 2001 and 2005, though the Economist article recycles them as breaking news.. A roundup of sorts can be found here.

Nowhere in Japan did I run into any foaming-at-the-mouth right wingers this time around. The only sound trucks I heard were trolling for old appliances and scrap metal. It was 5 years ago that I ran into the nationalist megaphone brigade, one Sunday afternoon in Tokyo’s Jimbochu district (Hi! I am illiterate, and everything is closed but pr0n video shops). Perhaps the presence of one uniformed police officer kept them from growling in my direction, or perhaps I was not on their furreigner-de-jour menu. Whatever; I have never really felt threatened in Japan. No right-wing beat cop has ever bothered me for my passport or implied that my used granny bike was bought off the back of a truck. Folks even sit next to me on crowded trains – especially if I am half asleep. (these three tropes seem to be the fave complaints of irked expat English teachers in the blogosphere). Most folks are more worried about getting on with their lives, the impending sales tax rise, the ossification of the political system and the graying of the population. It would be sad if the nationalistic loony fringe in Japan, China and S. Korea escalated the feedback chorus to the point where things got ugly on the ground, but I don’t think the majority of the Japanese public is anywhere near convinced.

That ANA commercial was probably trying to be all post-modernist self-mocking about it all. Perhaps they anticipated the whole kerfuffle as an “as- long-as-you- spell- my- name- right” gambit.

What would mass culture be without a bit o’ trolling?

Trolling is nothing more or less than an abbreviated urge towards fan-fiction.

“The facile trick of mis-attributing spurious quotes to one historical figure or another, such as “Oscar Wilde” betrays a deeper melancholy within the displaced desires that manifest through our disconnected virtual discourse. […] Virtual reality simply generalizes this procedure of offering a product deprived of its substance: it provides reality itself deprived of its substance, of the resisting hard kernel of the “Real” – in the same way decaffeinated coffee smells and tastes like the real coffee without being the real one, Virtual Reality is experienced as reality without being one… [..] What this means is that the discourse of the Web is thoroughly mystifying, concealing its true foundation, obfuscating the un-freedom on which it relies. In such, and as antidote to this “gravitational pull”, I propose that all such mis-attributed quotes must henceforth be attributed to me or Jacques Lacan…”
On the melancholy of making up Oscar Wilde quotes – Slavoj Žižek